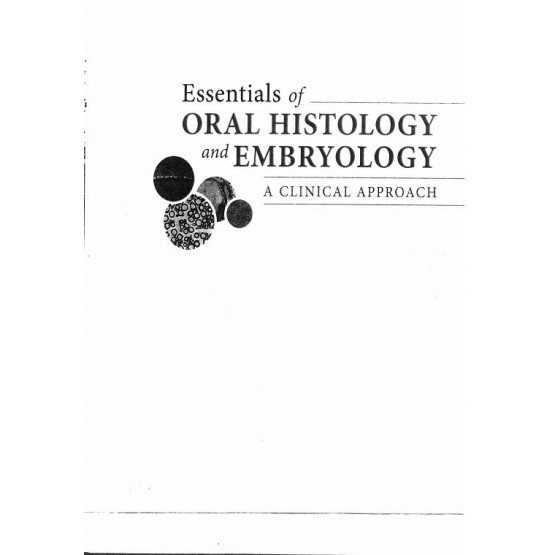 Essentials of oral histology and embryology a clinical approach

OVERVIEW
The smallest unit of structure in the human body is the cell, composed of a nucleus and cytoplasm. The nucleus contains deoxyribonucleic add (DNA) and ribonucleic acid (RNA), the fundamental structures of life. The cytoplasm functions in absorption and cell duplication, in which organelles perform specific actions. The cell cycle is the time required for the DNA to duplicate before mitosis. This chapter discusses the four stages of mitosis: prophase, metaphase, anaphase, and telophase. Also described are the three periods of prenatal development: proliferative, embryonic, and fetal. The fertilization of the ovum in the distal uterine tube, zygote migration, and the zygote’s implantation in the uterine wall are discussed. In addition, the origin of human tissues—ectoderm, mesoderm, and endoderm—is presented, followed by the differentiation of tissue types, such as those of ectodermal origin, epithelium and skin with its derivatives, and the central and peripheral nervous systems. This chapter also delineates development of the mesodermal components involving connective tissues of the body, such as fibrous tissue, three types of cartilage, two types of bone, three kinds of muscles, and the cardiovascular system. The reader will better comprehend the origin, development, organization, and structure of the various cells and tissues of the human body.
CELL STRUCTURE AND FUNCTION
The human body is composed of cells, intercellular substance (the products of these cells), and fluid that bathes these tissues. Cells are the smallest living units capable of independent existence. They carry out the vital processes of absorption. assimilation, respiration, irritability, conductivity, growth, reproduction, and excretion. Cells vary in size, shape, structure, and function. Regardless of function, each cell has a number of characteristics in common with other cells, such as cytoplasm and a nucleus, which contains a mideoius. However, some cell characteristics are related to function. A cell on the surface of the skin, for example, serves best as a thin, flattened disk, whereas a respiratory cell functions best as a cuboidal or columnar cell to facilitate adsorption with mobile cilia to move fluid from the lung to the oropharynx. Surrounding each cell is the Intercellular material that
provides the cell with nutrition, takes up waste products, and 1
provides the body with form. It may be as soft as loose con- f
nective tissue or as hard as bone cartilage or teeth. Fluid, the I third component of the body, is the blood and lymph that |
travel throughout the body in vessels or the tissue fluid that I
bathes each cell and fiber of the body. f
Cel! Nucleus j
A nucleus is found in all cells except mature red blood cells ! and blood platelets. The nucleus is usually round to ovoid, depending on the cell’s shape. Ordinarily a cell has a single f nucleus; however, it may be binucleate, as are cardiac muscle f cells or parenchymal liver cells, or multinucleate, as are osteoclasts and skeletal muscle cells. The nucleus is important in the production of DNA and RNA. DNA contains the genetic information in the cell, and RNA carries information from the DNA to sites of actual protein synthesis, which are ■■ located in the cell cytoplasm. The nucleus is bound by a membrane, the nuclear envelope, which has openings at the nuclear pores. This envelope is composed of two phospho- j lipid layers similar to the plasma membrane of the cell. The l pores are associated with the endoplasmic reticulum (ER) ! that forms at the end of each cell division. The nucleus con- I tains from one to four nucleoli, which are round, dense bod- | ies constituting the RNA contained in the nucleus. Nucleoli I have no limiting membrane (Fig, 1-1). I
Cell Cytoplasm j
Cytoplasm contains structures necessary for adsorption and I for creation of cell products. The cytosol is the part of the | cytoplasm that contains the organelles and solutes. The cyto- | sol uses the raw materials brought into the cell to produce | energy. It also functions in the excretion of waste products, I These functions are carried out by the ER-parallel membrane- 1 bound cavities in the cytoplasm that contain newly acquired I and synthesized protein. Two types of ER, smooth surfaced I and granular or rough surfaced, can be found in the same cell I Rough-surfaced ER is caused by ribosomes on the surface of I the reticulum and is the site at which protein production is §■ initiated. Proteins are vital to the cell’s metabolic processes, § and each type of protein is composed of a number of different J amino acids linked in a specific sequence. Amino acids form 1 protein-containing groups, which, in turn, form acids or J bases. I
Ribosomes are particles that translate genetic codes for pro- I teins and activate mechanisms for their production. They can 1
be found as separate particles in the cytoplasm, clustered as 1
polyribosomes, or attached to the ER membranes. Ribosomes |
are nonspecific as to what type of protein they synthesize. The j
type is dependent on the messenger RNA (mRNA), which car- |
lies the message directly from the DNA of the nucleus to the f
RNA in the ER. This molecule attaches to the ribosomes and f
gives orders about the formation of the amino acids. f
The ER transports substances in the cytoplasm. The ER is j connected to the Golgi apparatus via small vesicles. The f Golgi apparatus or complex is critical for posttranslational modifications which help sort, condense, package, and deliver proteins arriving from the ER. The Golgi apparatus is composed of cistemae (flat plates) or saccules, small vesicles, and large vacuoles. From here the secretory vesicles move or flow | to the ceil surface, where they fuse with thgfcell membrane and i the plasmalemma and release their contents by exocytosis. )
`